Chat with other people who 'Get it'

with health professionals in the background to make sure everything is safe and supportive.

Turn on suggestions
Auto-suggest helps you quickly narrow down your search results by suggesting possible matches as you type.
Showing results for
Search instead for
Did you mean:

Hi guys I am new here but just skipped over introducing myself and threw myself straight into the forums so let's rewind a minute.

I was diagnosed with Bipolar Affective Disorder in 1990. It changed my life and not in a good way. My mother said "now you will never do anything with your life" and my Aunt said "we should put her in an institution". It was right then that I decided that I would live the best life I possibly could with this illness. I since met and married my husband and we had 3 gorgeous children who have all now reached adulthood. I have been in and out of hospital a lot since around 2008 and somewhere along the way had BPD added to my diagnosis. I enjoy art and crafts, playing computer games and watching tv. I was working with a psychologist and we were going to work on childhood trauma as I grew up in an abusive household but I kept getting sick so we are currently on a break. Not sure if I want to go back to therapy at this point in time. Not sure what else to add so I will just leave it here. Feel free to ask questions x

Just a quick g'day from me

Hi @Meggle, thanks for taking some time to introduce yourself I'm not sure if we've e-met- I'm Girasole, one of the Peer Support Workers on the forums 🌻

Those sounds like some really hurtful reactions you received from family after your diagnosis, I'm sorry that happened. I think that was such an incredible way you reacted, though, in saying to yourself that you wanted to live the best life possible, in the face of all that you've experienced- what a great testament to your character

I'm not sure how familiar you are with Blue Knot, but they have a lot of online resources on their website, as well as a support line for adult survivors of childhood trauma, which might be of interest to you?

Take care, and I hope you have a great day

8 Supported
Reply
in response to: Re: Introduction
Meggle
Senior Contributor

Hi @Meggle Nice to meet you! I'm a Community Guide here and one of my roles is to show new members around. I ser you like crafts. Great! What types of crafts do you like or do? I'm into knitting, crochet and cross stitch myself and there are several discussion groups that are here  such as Re: Craft Corner.Number 4 attempt and Knitting .
I'll tag @bipolarbunny who has knowledge of Bipolar as well as I don't have this condition personally although I know a bit about it.

I look forward to seeing you around the forums!

you know what you just have an advanced personality.

that's my spin on it.

every thing comes in twos hun,

iv read the dsm5 and you know what.

I fall under at least 4/5 categories, and I can assure you that anyone would fall into at least two of the phenotypes.

who wants to be like a carbord cut out of a person anyway.

Just read your intro, tho' we have spoken on other threads on the forum. I was intrigued by the response of your Mum and Aunt, who seemed to respond to the diagnosis of BAD as somehow meaning that you were now (at that time), as a result, somehow different, to the point that "now you will never do anything with your life" and "we should put her in an institution".

I have very much enjoyed reading your observations and responses on various threads. We can, as you have described, "live the best life I (we) possibly could (can) with this (whatever) illness" that we have. We can contribute in meaningful and productive ways, among the people with whom we share Illness and other challenges. We also, often apply our gifts in ways that contribute to the functioning of the wider community.

The issues that we have had, do now, and will face, give us insight, that others often are not aware of, and have difficulty conceptualising, even when they may be dealing with them in their "normal" world.

It is really quite amazing how often the "childhood trauma as I grew up in an abusive household" issue comes up in the forums. I think it is also surprising that people often say that "I thought everyone else's life was just like mine".

Many of us still have difficulty addressing those previous life issues, often not so much because of the issue itself, but we still don't wish to take resources from those, whom we may perceive, need them more than we might. Sometimes, I believe that we also have adopted the idea from others, that we are over dramatising the effects of whatever issue that we are addressing. Consequently, we tend to try to minimise, or understate the issues that we face.

In a similar way that you have done, I dived in head first and then came back to an introduction. My thinking was that it would be by immersion that I would learn, and hopefully understand, aspects about where I have been, where I am at now, and where to from here.

Very nice to have 'met' you and I look forward to our interaction, with others, here on the forum.

4 Supported
Reply
in response to: Re: Introduction
Meggle
Senior Contributor

Thankyou so much for taking the time to respond, I just finished reading your response to @LostAngel also. I very much enjoy your insights and your skillful wording of things.

I agree with you, just because I was diagnosed didn't mean that suddenly I was a different person or anything less than I was before but unfortunately this is the way that it was perceived and ultimately led to the breakdown of familial relationships. Living the best life possible is the only way I could move forward and make meaning out of a horrible situation. I feel like I have been pretty successful at living my best life possible. I love my Husband and children so very much and am lucky and blessed to have them in my life. I do have work to do with a psychologist regarding my childhood trauma and the ways that it still affects my life today! It is a common story isn't it? Childhood trauma and mental illness seem to go together.

Looking forward to getting to know you better

4 Supported
Reply
in response to: Re: Introduction
Meggle
Senior Contributor

Hey @Judi9877 I am a beginner at both knitting and crocheting although I have crocheted several blankets (baby and bigger). I bought all the art of knitting magazines and was trying to work my way through the blanket squares. Some of those have been really hard. So far I have done around 20 or so. I also like to paint. Here is a picture of my current project. 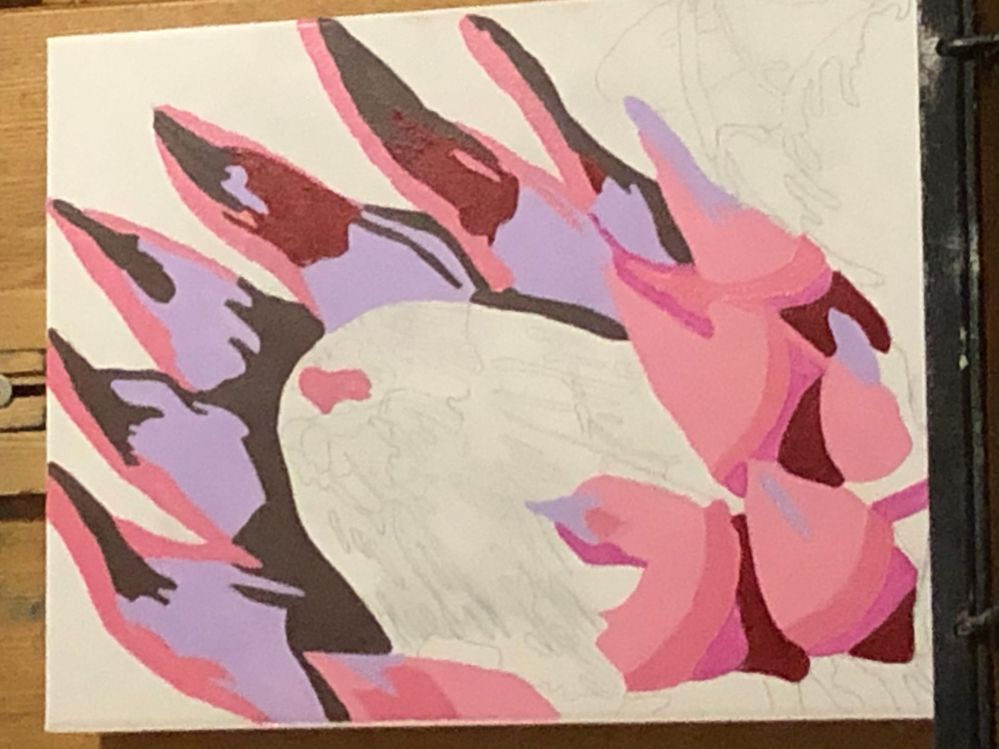 7 Supported
Reply
in response to: Re: Introduction
Meggle
Senior Contributor

Thanks @Ybother for your response

You know what? You are pretty beautiful too

Have a great day

Chat with other people who 'Get it'

with health professionals in the background to make sure everything is safe and supportive.